Once a week we post a round up of what we have made on most of the things we do to earn income online.


There are a few other things that we do, but these are the ones that at least one of us has cashed out from in the past so we can verify from personal experience that each of these actually does pay out as promised.

We are providing this data to assist those who are considering starting one or more of these programs to supplement their own income.


Accelerant We have received the $50 for last month's work and been approved for an additional month.  This is something we both work on but Jamey does the lion's share of the work for it.

Appen  I am an independent contractor for Appen and submit an invoice for the previous month at the beginning of the next month.  My invoice for June has $95.29, which will pay in mid July, of completed work.    So far I have $35.55 on my invoice for July as I have started an additional Appen project so I am estimating that I will make around $300 or so from Appen in July which will help out a lot as I need to have some oral surgery done.

DailyBreak  Why I No Longer Recommend This One

E-Poll Express Yourself is still at 2450 points now, as I only receive occasional invites for surveys.  We need an additional 4,800 points for our next $10.00 gift card.

Fetch   4179 points because we have not been going to brick and mortar stores to get receipts.  We connected this to our Amazon account as e-receipts are supposed to count but so far I am not seeing any sign of that.  (This is included here though as we have cashed out from Fetch (gift cards) in the past.)

Google Play (Doreen) I am at $8.33 but this tends to vary as I do use this money for various things on Google Play.

Ibotta is up to $22.53.   Connecting it to our Walmart account for grocery pickup and delivery is working.

Kelloggs Family Rewards is back up to 1010 points.   I just noticed that they are now allowing receipts from online orders too.  We meant to give that a try and report back in last week's round up how it worked, but this past week has been rough and the next week or so will also be challenging for us.

Pawpoints  is at 695 points as we received a 10 point bonus for Night's birthday.   When we reach 775 points, we can get another coupon for a free 25 pound box of cat litter.

PineCone is back up to $3.50 and should soon be at $6.50 as I did another survey last week that I have not been credited for yet (likely because of the July 4th holiday).  My last cash out was $25 in the form of a Walmart gift certificate on June 14th.

Prolific  (Doreen) - This is something we just started in the past week or so.  We plan to do a blog post on it next week since Jamey has now cashed out from it.  They are based in Britain and pay in pounds but you can use PayPal to cash out.   So far, I have earned £9.16 ($11.44) which is enough to cash out (you can cash out when you reach £5.00 )

Shopkicks is back up to 420 but is rising very slowly as since we are not going to brick and mortar stores, we are only earning shopkicks from watching videos.  It is going to take quite a while to get back up to 1250 for another $5 gift card.   (We used to accumulate points much faster when we were actually going to the store instead of ordering online only.)

SurveyJunkie is only back up to $2.16 as I don't do it often because the prices for surveys are not very good and I get kicked out of most of them.    I stick with it though as each point is worth one cent and over the time I have been on it, I have earned 7,027 points, i.e., $70.27 worth.  (I have cashed out on this one several times, so as with everything else on this page, I know they actually do pay.)

Swagbucks.  We is down to 956  swagbucks, because I just cashed out for another $25 gift card on July 1st.  (That brought us up to $175 in egift cards to use on our next Walmart order.)

Another ongoing minor source of income for us are our Teespring and Redbubble shops. which features our own cats.   Teespring donates 10% of the products for it to Foster Mama Kittys cat welfare group. 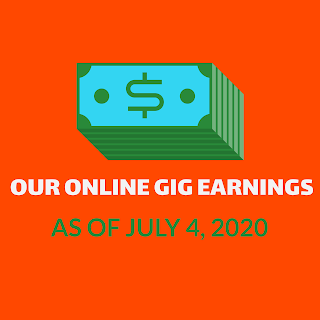