We only post data on online work jobs that we know from personal experience actually pay.  We are both doing work for https://www.prolific.co/ now and Jamey has been paid already and I have earned enough that I can cash out too.   Prolific only requires £5.00 in order to cash out and it can easily be done with PayPal.

The application process for Prolific is quite interesting as the people behind the site have a definite sense of humor and it shows up in the type of qualification questions they ask.   I have been an online gig worker for several years now and never encountered some of the rather creative questions that Prolific posed.

Once you complete the application process, you then need to go in and very thoroughly fill in the About You section.  This is critical as the surveys that you are invited to participate in on Prolific will be based on the data that you provide in this section and if what you say in a survey does not match your information in the About You section, you can be disqualified from the survey.

Most of the surveys I have done on Prolific have been fairly quick ones, usually 3 - 10 minutes in duration, and often paid better than similar ones on Mturk.

As with Mturk, Prolific is very competitive and you have to stay on top of it if you want to get work.  You will occasionally get email invites but you mainly need to go out to the site yourself and see what they have available for you.

I also suggest joining the Prolific subreddit to get heads up on on what others are dealing with (both pros and cons) on Prolific.  As with all online work platforms, there will be wonderful requesters and others that are less pleasant to work with so it is helpful to see what other workers are experiencing.  Thankfully, so far all of my experiences on Prolific so far have been very positive.


***
July 10, 2020 update: I just read a post on the Prolific subreddit that is an excellent example of why it is beneficial to follow it.  As soon as I read it, I sent Jamey a heads up email to avoid this particular task on Prolific as people are reporting getting kicked out after putting 30 - 45 minutes in on this 60 minute task.  Please note this is not typical on Prolific which is why people were alerting others to this task.

Prolific is mainly, if not exclusively, University based studies which are often more interesting than commercial ones but at the end of each survey, there is a check to see if you had any problem with the survey which is a nice feature. Additionally, at the beginning of each survey you are told up front how long it is expected to take, how much you will be paid, given a reasonable idea of what it is about and may even be told if a bonus might be possible for it.

The bonuses can be quite nice as they can more than double the pay.  For example, I did one earlier today that had a pay rate of £2.00 pounds and earned a bonus of £3.50 for it.


Prolific is based in the U.K. so all of the payments are in pounds and pence but it is easy to do a fast Google search to convert the figures if you are in another country and want to know the equivalent amount in your own currency.

We are in the United States and Jamey had no problem having PayPal do the conversion from British currency to United States currency and he was not charged anything by PayPal for doing so.

Jamey and I have been working on Prolific for less than a month (since June 19, 2020) and so far we are both getting regular surveys.  I did read in the Prolific subreddit though that they give preference to those who are new and after you have worked for them for a while, you begin to get fewer regular survey offers.  The post I saw said that Prolific was not trying to be like Mturk, a place where some people can make a full time income, but their goal instead is to make available as diverse a body of respondents as possible to the requesters.

If that is true, and at this time, I cannot verify from our own experience if it is, I would still recommend Prolific as a reliable source of extra income.   Since my own focus is mainly on earning income from Appen, Qmee and Mturk, I have not been checking Prolific daily for work but even checking it occasionally, I have earned £13.62 from it so far myself .   I am waiting for approval on two other Prolific surveys at which point I plan to do my first cash in on Prolific.

Jamey cashed in £10.69 via PayPal on June 30.  He received his payment in pounds on July 3rd and PayPal then converted that to $12.90 on July 5th.  Since cashing in, Jamey has earned an additional £7.20 from Prolific. 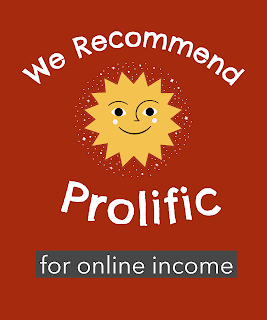 Survey Police has additional useful information for those who are contemplating applying for Prolific. I would note though that while they say

"Prolific promises that you won't get kicked out of surveys."

You still can get rejected after doing a survey if the requester believes that you did not provide accurate information or were not paying sufficient attention, i.e., you failed an attention check or did not respond properly to an essay question, which not all surveys have.   This is the case for all reputable sites of this type though including Mturk.

As of this writing, there are 60 reviews for Prolific on Survey Police.  78.3% of the people who responded gave Prolific a 5 star review and an additional 6.7% gave it a 4 star review so 85% of the reviews are 4 star or higher.

I have looked at other review sites for Prolific and they give similar amounts of 4 and 5 star reviews (or the equivalent).  I would encourage you to do your own research and then if you like what you see, give Prolific a try yourself.   If you would like additional information before signing up for Prolific, you may also wish to take a look at the Prolific blog.

If you find that you do like, or that you don't like, Prolific, we would love to hear about your experience in our comment section below.