Some of the Problems With Surveys

Surveys can be one of the most frustrating ways to earn income online.


We do earn some money from surveys every day but they can be frustrating.  This is not only because of the problem of qualifying for them, especially if you are like us and don't participate in many of the activities that are seen as standard or normal such as watching television, going to movies, drinking alcohol, etc.

It increases the challenge when you do find a survey that you qualify for and there turns out to be a problem with the survey.  Some of these you can get past, others will stop you cold forcing you to return a survey that you have spent a chunk of time on and normally getting no compensation at all.

Sometimes you even finish a survey and end up getting nothing.


For example, I recently grabbed a Qmee survey that was supposed to take 12 minutes.  Once I opened it though, it said it would take 25 minutes.  I decided to do it anyway, completed it and then I was told

The survey provider has enough respondents for this survey but don't worry, there'll be others for you very soon.


I wish I could say that this is the only time this has happened, but it is not. 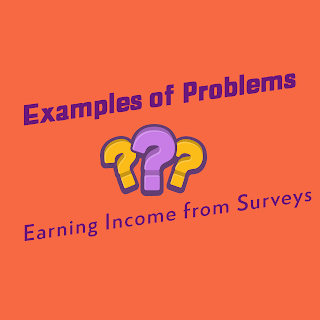 I truly try to always answer survey questions honestly but


another all too common problem is that sometimes surveys lock you into a position where you cannot give an honest answer.  I will give several examples of this that I have encountered recently on different survey sites:

1) The survey gave me a list of medications and asked me which ones I take for my stress incontinence.  I said that I don't take any medications for it.  The next question asked me which problems I had prior to starting medication for my bladder problems.

2) The survey asked "have you ever been pregnant?"   I said "no."  The next question asked "when was your most recent pregnancy."   It would not let me continue on in the survey without answering so I had to return it.

3) After telling another survey that I don't fly, I was asked for "the best description of the average length of trips you typically take (flight time only)."  That was another one that I had to return.

4) One last example is stating that I don't own a car and then being required to pick out the car I own from a list.  I have run into this one a number of times and, of course, I have to return those also.


Then there are the surveys that simply leave me stunned.

A device detection script that would be able to record what type of device the respondent is taking the survey on (i.e., a tablet, a laptop, cellphone, desktop computer, etc.)  This would punch into a single selection question.

I won't reproduce anymore of it here but I received that behind the scenes type of data for about half a dozen questions after which the survey simply self-destructed.  Before it did though, I learned such interesting things from the coding as that we are considered "financially fragile."


Of course, the issue here is that no matter what type of problem the survey has, the end result is usually the same - you put time into it that you could have been using to earn money in another way and you get nothing for it beyond perhaps some interesting information if you happen to run into a survey that has coding instructions instead of questions.

This means that some days, we might put three hours into surveys and get $5 and other days we are lucky if that same three hours nets us a total of $0.25.    That is why we both rely mainly on things like Mturk and Rev and Appen for the majority of our online work income and just supplement with surveys.

While I can plan to some degree how much I will receive from Appen, Mturk and Rev can be very good or very slow.  This makes it difficult to budget when we never know even from day to day let alone week to week or month to month how much we will earn from our side hustles.

At some point in the future, I will do a blog post on the topic of budgeting for online gig workers.